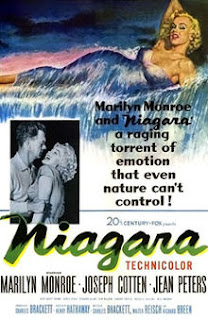 There's just something about Marilyn Monroe that's absolutely mystifying, but what is it exactly? Is it the screen persona that views her as glamorous, even though she was the opposite in real life? Or was it when she was on screen, she became the prime focus? Either way, she has captivated audiences for decades.

Ever since I saw her in Some Like It Hot, I became curious as to what else she had to offer. Four more movies later, I saw her in Niagara. This was different from the other movies I saw her in. Rather than being a dumb blonde, her Rose Loomis is a calculating dame.

Rose is plotting to kill her husband George (Joseph Cotten) at, ironically, the honeymoon capital of the world. It's an airtight scheme and mistakes are rare. But it's once the crime is committed that the scheme falls apart at the seams.

What Monroe offers here is a new meaning on the saying "looks can be deceiving". She wears a welcoming smile and is very sociable, but don't let that fool you. Underneath the smile is a mind that's dark.

Niagara in itself is a good movie but as with the case of other Monroe movies, it lacks something when she's not on screen. There's also a good performance out of Cotten. It's a good story too, but I felt there should have been more.