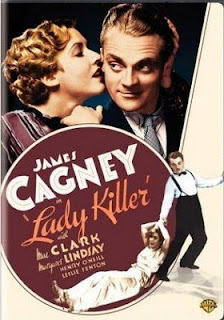 Like I said a few days back, pre-codes were the most entertaining type of movie. Perhaps they were so carefree solely because they were released during a time when people were straining to forget their worries.

In 1933, Roy Del Ruth made Lady Killer, an amusing tale of crime and Hollywood. The combination of the two kept me entertained from beginning to end. Not many movies can boast a feat like that.

The star of Lady Killer is James Cagney, whom I realized from this that he had a real firecracker of a personality. I have a feeling he had fun with his role of a theater usher turned small-time hood turned movie star. After all, this was made a whole two years after his star-making turn in The Public Enemy.

I'm not sure, but I believe Lady Killer was one of the first movies to show the behind the scenes/on the set action in Hollywood. Bear in mind this was years before Sunset Boulevard, Singin' in the Rain and The Bad and the Beautiful. Hey, there's a first for everything.

More than once while watching Lady Killer I found myself chuckling at the many antics. Hey, why not? It's a really good movie. It also contains my favorite performance of Cagney's. In all honesty, I might be watching this again, perhaps in the very near future.