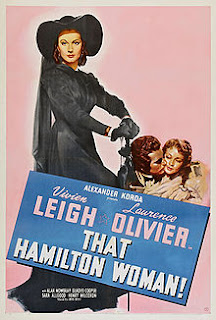 What is it about the 19th century and illicit affairs? They seem to be the main focus in films and novels.

An example of this is That Hamilton Woman, which stars then-newlyweds Laurence Olivier and Vivien Leigh. Both actors I'm fairly familiar with, and both give good performances as lovers Admiral Horatio Nelson and Emma Hamilton, who eventually became pariahs among English society.

Leigh I was familiar with from A Streetcar Named Desire and Gone with the Wind, the two films that earned her Oscars. As Emma, her personality lies somewhere between Blanche's and Scarlett's. She's a very independent woman yet she feels lost without Horatio by her side.

I was more familiar with Olivier from a later career film (Spartacus), his Oscar-winning film (Hamlet), and two films that got him nominated (Marathon Man, Wuthering Heights). As Horatio, he possesses the same traits that make Hamlet and Heathcliff who they are: tortured and doomed.

That Hamilton Woman is a gorgeously shot film, but the story leaves a lot to be desired. Not exactly Gone with the Wind or Wuthering Heights, but it's close enough to satisfy someone who loves a good romance.

My Rating: ****1/2
Posted by MovieNut14 at 10:47:00 PM
Email ThisBlogThis!Share to TwitterShare to FacebookShare to Pinterest
Labels: 1940s, movies, reviews