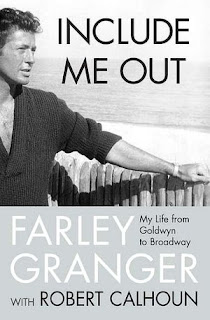 When most memoirs are published, they're usually those written by some of the biggest and/or more recognizable names in the business. Of course, the lesser known (but equally talented) names get published too.

One such name is Farley Granger. He is best known for the two movies he did with Alfred Hitchcock, Strangers on a Train and Rope. Granger isn't as known by many today because his true calling was on the stage rather than the screen, silver or small. He passed away last year but like his career, it got overlooked by many. (He died just days after Elizabeth Taylor.)

Granger wasn't particularly fond of the spotlight when he was still in Hollywood, but that didn't stop him from writing Include Me Out, his 2007 memoir. Not much was known about his personal life prior to the publication.

Like many actors of the time, Granger speaks of his discontent of Samuel Goldwyn's treatment of him. (However, Granger isn't too bitter; the title is one of Goldwyn's sayings.) He also speaks of his many productions, both screen and stage, and his meetings of some of entertainment's most talented names. (He also recollects the highly tumultuous friendship he had with Shelley Winters.)

Include Me Out contains some of the best descriptions I've read. Granger speaks of his ability to remember all of his lines if not the whole script. The same ability was used when he speaks of his experience making Senso (which, in my opinion, contains his best work as an actor). He repeats sometimes in his writing, though Granger shows that he had one hell of a life.

My Rating: ****1/2
Posted by MovieNut14 at 10:40:00 PM
Email ThisBlogThis!Share to TwitterShare to FacebookShare to Pinterest
Labels: memoirs/biographies, reviews