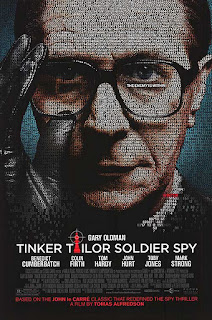 With the release of Tomas Alfredson's Tinker Tailor Soldier Spy, we are given a glimpse into the world of espionage. Don't expect James Bond; this is the real deal.

Tinker Tailor Soldier Spy is based on John le Carre's famed novel. Having never read it, I was curious to see what it was about. At the same time however, I was reluctant since the last two le Carre adaptations I saw (The Constant Gardener and The Spy Who Came in from the Cold) weren't as impressive as I thought they would be. I had almost the same problem with Tinker Tailor Soldier Spy, but just barely.

Tinker Tailor Soldier Spy is a damn good film, but I was left wanting more out of it. I also felt that the ending was trying to quickly tie up all of the loose ends. Still, a good story and fine acting makes up for the slow spots.

My Rating: ****1/2
Posted by MovieNut14 at 3:47:00 PM
Email ThisBlogThis!Share to TwitterShare to FacebookShare to Pinterest
Labels: 2010s, movies, reviews