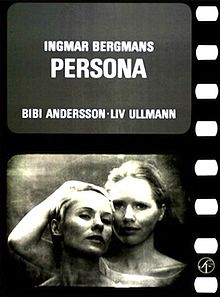 With Ingmar Bergman's Persona, viewers are offered a glimpse into the minds of two different women. One talks about her personal life, the other remains quiet.

I knew of Bergman's depiction of human behavior and nature from The Seventh Seal. With Persona, he provides a more in-depth glance on both topics. (On a different note, why do most foreign films focus on those two mainly?)

It's hard to say which of the two leading ladies gave the better performance. Bibi Andersson's Alma tells of every detail of her life, many of them she never told anyone before. She soon starts speaking for both women, and her transition from each personality is astonishing.

On the flip side, Liv Ullmann's Elisabet Vogler speaks volumes by barely speaking at all. She clearly has a perplexing personality, yet we still wonder about her after we've learned everything about her. Every emotion of hers is played across her face yet she is devoid of any. (Well, except for an early scene.)

Persona really makes you think about one's identity, who we are in society. It also captures two of the best female performances I've seen. And maybe, just maybe, I'll be able to understand Mulholland Drive a little better if at all.