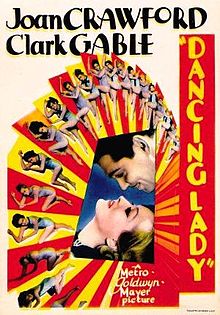 This is a known fact: pre-codes were the most entertaining type of movie. Hey, they were sometimes riskier than today's movies.

Joan Crawford is someone I am really starting to like with each passing movie. She's a very lively actress and such a trait is shown in Dancing Lady. As Janie Barlow, she shows a determination that is lacking in most film characters today. It may also be my favorite performance of Crawford's.

As Patch Gallagher, Clark Gable gives a performance with a lot of gusto. How to describe Patch? Frankly, my dear, he doesn't give a damn. (Sorry, I had to.)

Franchot Tone I only knew of for two reasons: his Oscar-nominated role in Mutiny on the Bounty and his marriage to Crawford. (Both happened in 1935.) As Tod Newton, he possesses a bit of a sly aura within the role. You don't see roles like that very often nowadays.

I just adore Dancing Lady. It's so carefree and I just love it. Oh, extra bonus of Dancing Lady is seeing Fred Astaire in his film debut.

My Rating: *****
Posted by MovieNut14 at 10:44:00 PM
Email ThisBlogThis!Share to TwitterShare to FacebookShare to Pinterest
Labels: 1930s, movies, reviews