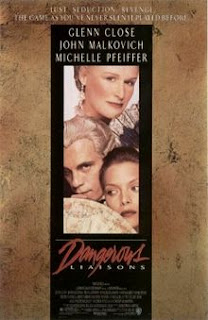 Whoever said the late 1700's were a time of civility clearly never saw Stephen Frears' adaptation of Dangerous Liaisons. Trust me, civility is the last thing on the characters' minds.

Glenn Close has always been a great actress. (And yet no Oscar to prove it!) This and Fatal Attraction show how heartless her roles can be. She's as cold as a block of ice, and she's damn effective. The last few scenes of her show the extent of her being.

John Malkovich, like Close, knows what he's doing here. He too is cold, but not as cold as Close. It's a hell of a performance from him, perhaps the best of his career.

Michelle Pfeiffer is different from Close and Malkovich. Unlike their very present frigidness, she provides the only warmth in the whole film. She isn't false in any of her emotions like Malkovich clearly is. Another great performance out of Dangerous Liaisons.

Dangerous Liaisons is a great film, but I found the storyline a tad disjointed. Along with Close, Malkovich and Pfeiffer, there's also some great work from a young Uma Thurman. (Also, what the hell is Keanu Reeves doing in this?) This is for those craving a darker view on the 1700's.