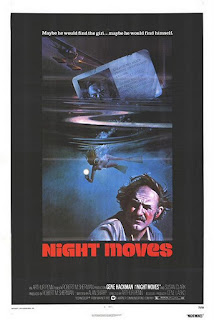 With Arthur Penn's passing back in 2010, I was compelled to see some of his films (as with the case of other names in the business that have died recently). But what to watch? I had already seen Bonnie and Clyde and The Miracle Worker within a month before his death.

Then I discovered Night Moves, his film from 1975. It's an underseen entry year because, let's face it, 1975 was loaded with great movies. Like the other releases of the year, Night Moves is damn good.

Gene Hackman, who worked with Penn on Bonnie and Clyde, stars as detective Harry Moseby. He's stuck in a faltering marriage, but he doesn't let that affect him too much. Comparing him to other film private eyes, he shares similarities with Elliot Gould in The Long Goodbye.

In relation with Bonnie and Clyde and The Miracle Worker, Night Moves focuses more on character development than it does on plot development. I'm saying it not as a bad thing but as merely an innocent observation.

All in all, I really liked Night Moves. The flow of it kind of bothered me considerably, but the performances made up for it. Either way, it's an underrated entry of the 1970's.