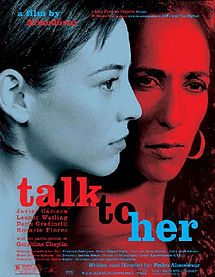 What is it about foreign films that has them capturing emotions and feelings better than American films? It's something that makes them stand out.

I was familiar with Pedro Almodovar's work, but hadn't seen any of it. At least until the mesmerizing Talk to Her entered my life. I really had no idea what I was in for.

What I got was a very hypnotic tale of love and obsession. Not many films can cover topics like that with ease. The only two I know of are Alfred Hitchcock's Vertigo and Johnathan Glazer's Birth.

Like Hitchcock before him (and Glazer later on), Almodovar shows how love and obsession actually go hand in hand. One doesn't just fall in love; there are many different aspects to being in love. It isn't just the heart involved but also the mind.

Talk to Her is one of the best foreign films ever made. It's as spellbinding as it is heartbreaking. It never lands on a false note at any point. As of now, I have a preconceived notion that seeking Almodovar is in my future.