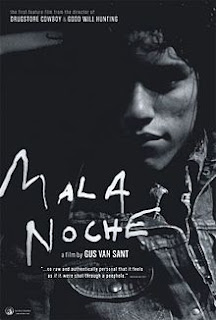 There are very few directors that, regardless of how well their films do, continue to work in Hollywood. One such name is Gus Van Sant. His filmography has been a mix of studio productions and independent features.

His debut Mala Noche falls into the latter category, and conveys many themes seen later in his work. (If you've seen any of his later works, you know what those themes are.)

Much like My Own Private Idaho and Good Will Hunting, Mala Noche features a lead character who's on the fine line of being out of place in society and belonging in it like a normal person. Throughout the film, he wavers on that line, staying on each side for some time.

In a similar vein of Milk and To Die For, the lead has aspirations he plans to achieve. He won't let anyone or anything get in his way, regardless of what others might think.

Mala Noche has you thinking about aspects of society, something Van Sant most definitely did with Milk. What's right with it? What's wrong with it? These are questions that are raised constantly when watching this transfixing film.