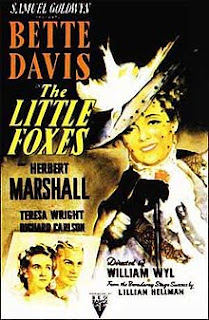 With William Wyler's The Little Foxes, we see the many shades of human nature. Some light, some dark, all compelling.

Regina Giddens (Bette Davis) by appearance is a very sociable woman. Behind closed doors, it's a whole other matter. Along with her brothers, she aspires to gain a good chunk of money from the business deal they want to act out on. However, there is one small problem.

That problem is Regina's husband Horace (Herbert Marshall). They need his money to go through with the deal. But Horace, a man that's weak both physically and mentally, refuses. Naturally they aren't pleased.

Between all of this is Regina and Horace's daughter Alexandra (Teresa Wright). She temporarily becomes a pawn in the scheme to get the money, but she clearly wants no part in any of it.

Regina, Horace and Alexandra are all completely different people. To think they live under the same roof. Their morals and beliefs vary and it's obvious that the Giddenses are a very fractured family.