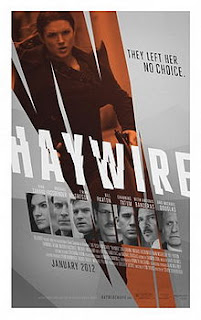 I have mixed feelings towards Steven Soderbergh. On the one hand, I was very much impressed by Traffic (though it rubbed me the wrong way in parts). On the other hand, Contagion, which was more than effective in the first two acts, completely fell apart in the third act. (And don't get me started on that ending. Ugh.)

His newest movie Haywire falls somewhere in between those two. It possesses a plot where government conspiracy and covering the truth are involved. However, Soderbergh doesn't focus on those topics of interest long enough. It appears he's much more interested in guns going off and necks being damn near broken.

Of the three Soderbergh movies I saw, it's clear he likes working with an ensemble. Many of the actors he has worked with range from popular stars to award winners. The cast for the mostly male-dominant Haywire includes Ewan McGregor, Antonio Banderas, Michael Douglas, Bill Paxton and Michael Fassbender.

The star is Gina Carano, who is nothing more than a plot device. Indeed she kicks serious ass, but she isn't given much else to do. Then again, that is usually the case with most action movie leads.

All in all, Haywire is an okay movie. My opinion would probably be different had it been a little longer. The performances sans Carano and Channing Tatum are good. The only thing that really stuck with me was David Holmes' music. Oh, and it ended on a much more interesting note than Contagion.