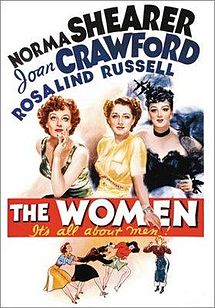 It's ironic once you think of it. George Cukor is noted for his "women's pictures" (particularly the ones he made with Katharine Hepburn), and he made a literal women's picture. Why literal? I'll explain.

The Women starred only women. (Even the animals showed are female.) Upon hearing the dialogue, it was clear that it was written by and for women. This wouldn't have worked if it was written by men, mainly because they don't know what goes on in a woman's mind.

The cast has some of the biggest names of the time, most of them I've seen in other movies. Such names include Rosalind Russell, Joan Crawford, Paulette Goddard and Joan Fontaine. I loved the performances from all four of them, but Russell and Goddard stood out the most for me mainly because they have attitude (and most of the movie's best lines).

Prior to this, I hadn't seen anything with Norma Shearer. After seeing her in The Women, I now desire to see more of her work because she possesses an aura very few actors have. This aura shows she's the kind of person you support no matter what.

The Women just works wonderfully. Cukor shows that he knows how to work with actresses, all of whom play their roles vibrantly. And is it any surprise that this great movie was released in the great year of 1939?