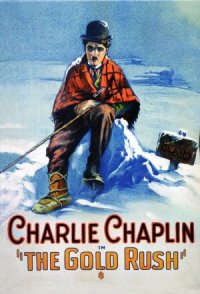 I had seen two Charlie Chaplin films prior to The Gold Rush. Both were essentially social commentaries (Modern Times, The Great Dictator), but The Gold Rush provides pure entertainment.

What's best about The Gold Rush is that the simplest of gags can still be funny even after almost ninety years. Not many films can boast a feat like that.

Such gags include Chaplin eating his shoe, the cabin on the edge of the mountain an d my personal favorite, the dinner roll dance. Just watching those gags makes it clear as to why they're so iconic.

What The Gold Rush also captures is heart. Bear in mind this was made several years before City Lights, a film I am in dire need of revisiting. Still, Chaplin was and always will be one of the few names that could have comedy and tragedy in one film, and make it work.

The Gold Rush is one of those films that will always stand the test of time, as with many of Chaplin's other films. If you haven't seen it, you are most definitely in for a treat.