For a Few More Dollars 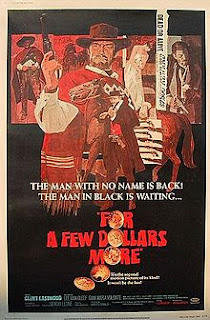 Usually sequels are expected to match up or even surpass the original film. It doesn't happen very often, mind you. When it does, it stands out as much as the original.

With Sergio Leone's For a Few Dollars More, it doesn't generally have the same bite as A Fistful of Dollars. It's just the flow isn't the same. Don't get me wrong. It's good, but there are flaws within the narrative.

Clint Eastwood still proves that he's a badass here, but he didn't have the same edge he had in A Fistful of Dollars. I still liked him regardless. Let's face it, who doesn't like Eastwood?

Lee Van Cleef I encountered before in two other films. No surprise that both of them were also Westerns (High Noon and The Man Who Shot Liberty Valance), so I knew the man could handle a gun. And damn well too.

So For a Few Dollars More didn't match up with A Fistful of Dollars. I wasn't surprised in all honesty. All I hope for is that The Good, the Bad and the Ugly will be better.