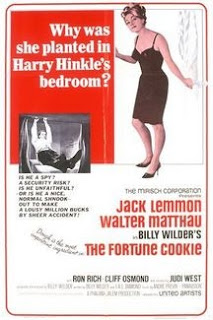 For over two years now, I have been an unapologetic admirer of Billy Wilder. How could you not like him? The man had enough humor and wit to shame anyone who dared to upstage him.

His 1966 film The Fortune Cookie stars regular/favorite actor Jack Lemmon as a TV cameraman injured from filming a football game. Like many of his other roles, you support him because of the many hardships he endures. Besides, who doesn't like Jack?

The Fortune Cookie is notable for being the first of many movies between Lemmon and Walter Matthau, and for good reason too. Their scenes together are just some of the best comedy captured on film. And Matthau is particularly a scene stealer as Lemmon's brother-in-law/lawyer. No surprise on how he got the Oscar.

This was Wilder's last big success (though not his last movie), but you can still tell that he had that stamina within him. This was also made when the Production Code was on its last legs, and there are the expected sly jokes (and then some). All in all, this has Billy Wilder written all over it.

The Fortune Cookie is undoubtedly one of Wilder's best. More than once I caught myself laughing out loud. It definitely gets up there among the ranks of Some Like It Hot and The Apartment.