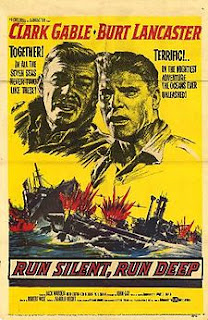 A common theme in some war movies is that of revenge. Mostly if one of the characters lost something dear to them in battle, like a ship, a plane or a close friend.

In the case of Cmdr. Richardson (Clark Gable) in Robert Wise's Run Silent, Run Deep, he wants revenge on the Japanese who sank his submarine and several others. The thought of revenge almost consumes him.

Lt. Bledsoe (Burt Lancaster) and the rest of the crew notice Richardson's eccentricities. Richardson's behavior can't exactly be compared to that of Capt. Queeg in The Caine Mutiny or Capt. Powell in Mister Roberts, but tints of Capt. Ahab are present.

The contrasting acting styles of Gable and Lancaster is an interesting touch. Both have a natural style of acting, but Lancaster's style has more power within it. Since I consider both personal favorites, it's hard to say which of the two gave the better performance though Gable has an experienced edge for the role.

Run Silent, Run Deep is a really great movie. Wise captures the right balance of suspense, as well as actors at the top of their game. Considering this was released during the somewhat busy year of 1958, it's safe to say that it is an underrated entry of the year. It also means you should really check it out.