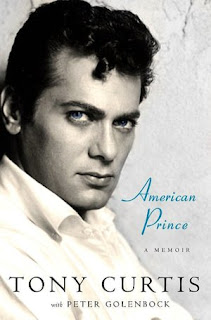 When celebrities have their memoirs published, it allows their fans to learn more about them. (Well, at least the stuff they keep out of interviews.) Then there are the names whose personal lives were exploited for most of their careers.

One such name is Tony Curtis. Being more than aware of his reputation as a womanizer who spoke his mind often, I was more than a little reluctant to read his memoir American Prince, which was published a few years before his passing in 2010. I had a preconceived feeling that it would be nothing but sex and smut on every other page. But once I started reading, I realized that he had a complex sort of personality.

Curtis, like most other stars of the Golden Age, didn't exactly have the best of upbringings. He went from the slums of the Bronx to the bright lights of Hollywood thanks in part to his good looks. In a span of nearly sixty years, he appeared in over 100 movies.

He tells of his many antics on the set (he was the target of many pranks early in his career) and off (the occasional get together among Hollywood's elite). There are several moments in the book that could raise some eyebrows (apparently Marilyn Monroe did too good of a job during their intimate scene in Some Like It Hot), but it's all good.

American Prince is one of the most sincere memoirs out there, however I didn't like how Curtis blamed his ex-wives for their failed marriages. (Because of that, I'm now tempted to read Janet Leigh's memoirs to see what she had to say about their marriage.) The words glide across the pages as he remembers pivotal scenes of his life and career. (His description of his brother Julius' death just shattered my heart.) Definitely a must-read.

My Rating: ****1/2
Posted by MovieNut14 at 7:26:00 PM
Email ThisBlogThis!Share to TwitterShare to FacebookShare to Pinterest
Labels: memoirs/biographies, reviews