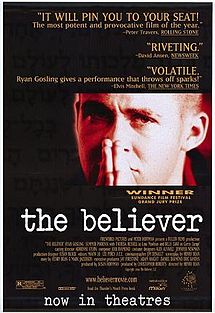 What causes someone to fall into an unsavory group? Peer pressure? Their own decision? Either way, their choices can shock those closest to them.

Danny Balint (Ryan Gosling) expresses his hate towards people of Jewish faith quite openly. But there's something about him that could get him killed by his colleagues. What is it? Danny is Jewish himself.

As The Believer wears on, you can tell Danny is getting pangs of conscience. He wants to despise his religion, but he can't bring himself to do so entirely. One powerful scene is where he performs a combination of the Nazi salute and Jewish prayer. The scene shows the type of conflict Danny is facing.

Danny is in a similar vein with Derek Vinyard in American History X. Both have strong prejudices, however we get a more in-depth look from Danny. Derek is already a reformed man when we first see him in the present day. (It's in the flashbacks we see his evil side.) With Danny, the seeds of his evil being planted are what we see in the flashbacks.

The Believer is quite good, but I think it wouldn't have done as well had it not had a daring actor like Gosling. The script is good, though it has its faults. To sum things up, it's worth a look.

My Rating: ****
Posted by MovieNut14 at 11:08:00 PM
Email ThisBlogThis!Share to TwitterShare to FacebookShare to Pinterest
Labels: 2000s, movies, reviews