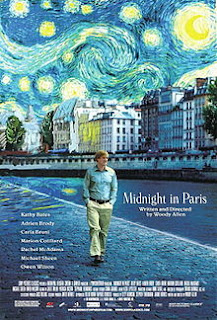 Woody Allen has always brought out the magic in his movies, especially with The Purple Rose of Cairo. In recent years, some of his entries lacked that magic. His newest movie Midnight in Paris brought the magic back and then some.

The first four minutes of Midnight in Paris shows shot of the City of Lights, which is reminiscent of the opening moments of Manhattan. You have to admire Allen for paying homage to his own work. Only he can display the glamour of a city without overdoing it.

Our protagonist Gil is played by Owen Wilson, who I considered one of two actors that perfectly captures the Woody Allen persona apart from Allen himself. (The other actor is John Cusack in Bullets Over Broadway.) Gil is clearly unsatisfied with how his life is going. He's constantly around people that you yourself wouldn't want to be stuck with at a party, including his fiancee. (They're at that stage that makes you wonder what made them fall in love in the first place.)

But then at midnight, Gil finds himself transported to his ideal location: Paris in the 1920's. Over several nights, he encounters prolific names of the lost generation. (Of the people Gil meets, my favorites were Corey Stoll's Ernest Hemingway and Adrien Brody's Salvador Dali.)

Much like The Purple Rose of Cairo, Midnight in Paris masterfully blends fantasy and reality. Almost immediately, I was swept up in the tale Allen had crafted. If you haven't seen one of this year's best...well, why haven't you?