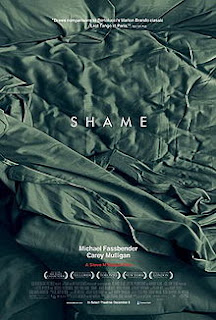 It's impossible to control one's demons if you're the only one who knows of them. Such is the case with Brandon (Michael Fassbender) in Steve McQueen's sophomore triumph Shame.

Brandon is addicted to something more physically debilitating than alcohol or any drug: sex. As the film progresses, you can see in his face that it's taking a toll on him. Matters only get worse when his younger sister Sissy (Carey Mulligan) shows up.

There are many long takes within Shame, much in the same vein as McQueen's previous film Hunger. There are also several shots of Brandon in pure silence. It's within those shots you wonder what's running through his tormented mind.

We never do find out what caused Brandon and Sissy to be who they are. Was it because of a traumatic event? Were they always like this? All we know is that they're in New York City to start over. (This makes Sissy's rendition of "New York, New York" in one scene all the more poignant.) By the end, we still know very little about them.

Don't turn away because of the rating. It's much more than sex. It's about raw and honest feelings. Think of it almost as McQueen's take on Last Tango in Paris. Fassbender is in a role so bold, daring and powerful that comparing it to Brando's role is practically an understatement. Mulligan possess much of the vulnerability and naivety as Schneider did. In short, fantastic performances, fantastic film.

My Rating: *****
Posted by MovieNut14 at 10:54:00 AM
Email ThisBlogThis!Share to TwitterShare to FacebookShare to Pinterest
Labels: 2010s, director: Steve McQueen, movies, reviews