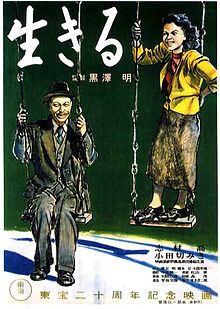 What would you do if your time on earth was to run out in a matter of time? Some would live their lives up in the little time they have. Others try to do something they'll be remembered for. In the case with Kanji Wantanabe (Takashi Shimura) in Akira Kurosawa's Ikiru, he does both.

Upon finding out of his stomach cancer, his life starts to spiral out of control. He tries to live up what's left of his life, but that doesn't fill the widening void within him. If you notice, he feels good when he makes someone else happy. That sets something off in his mind.

Wantanabe doesn't tell anyone of his cancer. Well, he tries to tell his son (he has a Mildred Pierce sort of relationship with him), but is shut out when he does almost speak up. In fact, Wantanabe is viewed with contempt by his relatives. Can you blame him for keeping his cancer secret because he didn't want to hurt anyone else?

The previous Kurosawa movies I saw (Seven Samurai, High and Low, Rashomon) all move at a fast pace. Not Ikiru. It moves at a pace slower than the rest. It might be a bother to some, but not to me. Plus, the slow pace gives us time to develop feelings for the characters.

In short, I loved Ikiru. It captures many emotions and feelings that so many movies try so hard to get. Also, if you don't feel anything from that shot of Wantanabe on the swing, don't even talk to me.