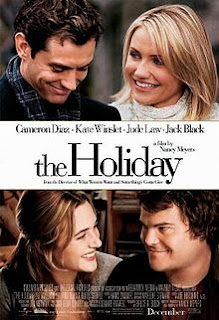 I always love it when I see a movie I originally thought I wouldn't like and I end up really liking it. (Not usually to the point of loving it.) Who doesn't love surprises?

This is the case with Nancy Meyers' The Holiday. From the fragments I saw, I figured it would be the usual tasteless romantic comedy. What I got instead was a movie that was really, really cute.

Among the actors in The Holiday are Cameron Diaz, Kate Winslet, Jude Law and Jack Black (and Eli Wallach in an awesome supporting role). Diaz and Black I normally like in very small doses, but I did like them in The Holiday. I liked Black more because he was more dorky than loud as he usually is.

This was a nice transition for Winslet and Law. Both did a number of serious movies prior to The Holiday, so seeing them each do a light comedic role is a subtle touch. Their work here proved they are more versatile than originally perceived. (That, and Law is freaking adorable here.)

The Holiday, as stated, is a very cute movie. My main complaint is that the script focused too much on Diaz and Law, and not enough on Winslet and Black. All in all, I liked it more than I thought I would.

My Rating: ****
Posted by MovieNut14 at 6:45:00 PM
Email ThisBlogThis!Share to TwitterShare to FacebookShare to Pinterest
Labels: 2000s, directed by women, movies, reviews