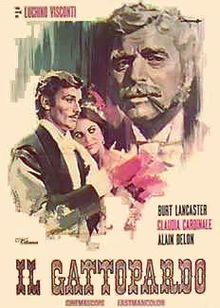 I'm not much on foreign films in all honesty. It's mostly because I want to, you know, watch a movie, not go through the hassle of reading subtitles as well. Mind you, it also depends on the film's quality.

Usually when I do finally see a foreign film, it's usually made by one of three directors I like: Federico Fellini, Akira Kurosawa or Luchino Visconti. In this case, I saw Visconti's The Leopard. It intrigued me because two of its main stars weren't Italian; one was American (Burt Lancaster), the other French (Alain Delon). This doesn't mean I'm viewing it as a bad thing. In fact, The Leopard contains some of their best work.

Lancaster's work here reminded me that of his work in Atlantic City. Both films have his characters witnessing change in a society they knew by heart, their statuses slowly becoming meaningless. Once towering figures now shifting to a lesser role. Also with both roles, you can see the wear and tear the changes have made on them just by looking at their faces.

Knowing Visconti, I could sense his meticulous eye for detail would be used here. Boy, is it ever. The ball scene alone will make your eyes dazzle. (Such care in details can also be seen in Senso.) The plot is interesting because it doesn't particularly focus on one topic. No matter. Just bask in what Visconti has to offer.

The Leopard has to be one of the most gorgeously shot films made. That is thanks to cinematographer Giuseppe Rotunno. In fact, everything in The Leopard is to die for. The acting, Visconti's direction and eye for detail, Rotunno's cinematography, Nino Rota's score...everything. If you don't believe me, see it for yourself.