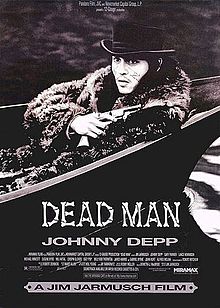 The Western has been varied countless times. It can focus on characters more than action (Rio Bravo), action more than characters (The Wild Bunch) or both (Red River). Each time they manage to gain a new audience.

Jim Jarmusch's Dead Man isn't a Western in the strictest sense of the word, but rather a neo-Western. It's not set strictly in a dusty little town or the plains of the west, but rather in the wilderness of the west.

Our hero of Dead Man is William Blake (Johnny Depp), a bookish accountant from Cleveland (and not to be confused with the poet). Early on, it's clear he's unprepared for what is to happen with him. Once everything falls into place, Blake becomes one with the wild.

From his arrival in Machine to his trek in the wilderness, Blake encounters a motley group of characters. Of them, the ones that stood out the most for me were Alfred Molina's bigoted trader and Robert Mitchum's gun-toting businessman. I think it was mostly because both go by their own rules and question anyone that questions them. (That, and they're both badasses. Mitchum especially.)

Dead Man has many aspects I approve of. The acting, the cinematography, the script all work. The narrative, however, bugged me a bit. No matter. Jarmusch's direction kept Dead Man afloat.