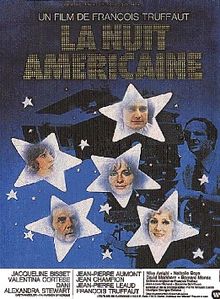 There are many movies that revolve around the production of another movie. Such examples include Stanley Donen's Singin' in the Rain, Richard Rush's The Stunt Man, and Federico Fellini's 8 1/2.

Another example is Francois Truffaut's Day for Night. It chronicles the many (and I mean many) complications that happen on a movie set. Such problems could be an actor being stubborn, someone on the verge of a breakdown or a relationship blossoming (or ending) on the set. In Day for Night, all three of those examples happen.

Other scenes in Day for Night reminded me of real-life accounts of what happened on movie sets. The opening scene was almost like what happened on any Stanley Kubrick movie. An actress requiring her lines to be pasted all over the set reminded me of Marilyn Monroe and her line "Where's that bourbon?" in Some Like It Hot. A set hand's always present, always suspicious wife mirrors when Zsa Zsa Gabor was on the set of All About Eve as then-husband George Sanders filmed his scenes with Monroe.

That doesn't mean Truffaut is making fun of the world of film. In fact, he's paying tribute to it. (It is dedicated to Lillian and Dorothy Gish after all.) This was a man truly devoted to the craft he loved. Not many people have such devotion.

Day for Night is one of the most insightful glimpses of movie production. Truffaut doesn't mock any of the characters but rather shows them as conflicted people. Definitely worth a look.