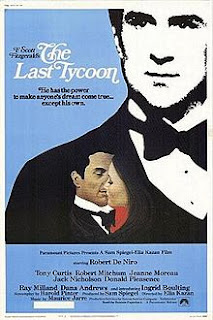 Elia Kazan is always known for making making movies where the main character has society against him. Look at Blanche DuBois in A Streetcar Named Desire. Look at Terry Malloy in On the Waterfront. Look at Philip Green in Gentleman's Agreement.

Also look at Monroe Stahr (Robert De Niro) in Kazan's swan song The Last Tycoon. Monroe is a movie producer, but recently he's losing interest in his work. He wants to focus less on his professional life and more on his personal life.

I admire Kazan going all out with the cast. Along with De Niro, the cast for The Last Tycoon includes Robert Mitchum, Ray Milland, Dana Andrews, Tony Curtis, Jeanne Moreau and Jack Nicholson. I'm not saying this because I like him more, but I think Curtis gave the better performance out of all these actors. He gives us what his role offers him, perhaps because he was a struggling actor like his character Rodriguez. (I love the one shot of Rodriguez as he sees a picture of his younger self hanging in Monroe's office, making him smile and remember his past.)

The Last Tycoon is based on F. Scott Fitzgerald's unfinished final novel. I'm not sure which parts were from Fitzgerald's mind and which from screenwriter Harold Pinter's, but I will say there are a lot of underdeveloped issues. It's just so many of the characters don't move forward.

All in all, The Last Tycoon is decent on many counts. Decent acting, decent direction, decent script. It could have been vastly improved, but what's presented is all right by most standards.