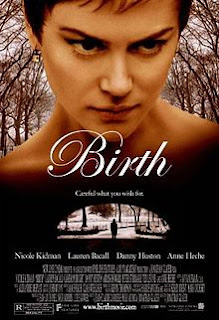 I've rarely seen a film as hypnotic as Jonathan Glazer's Birth. There hasn't been a film that captivates as well as Birth.

Many elements of the film could be allusions to Alfred Hitchcock's Vertigo. After all, both films revolve around the longing of someone who has passed on. Also in both films, the supporting characters are appalled at the actions and beliefs of the lead character.

In Birth, the lead character is Anna. She is played by Nicole Kidman, perhaps one of the finest actresses working today. As Anna, she delivers possibly the performance of her career. Many of her emotions are conveyed with not her words but her expressions. One lingering shot of her at a concert solidifies this concept.

The main star of Birth is not Kidman, nor is it Danny Huston or Lauren Bacall. It is Cameron Bright, whose eerie presence is felt when he's not on screen. Bright's performance is probably one of the few examples of where the work from a child actor is neither annoying or irrelevant to the plot.

Birth is one of the most neglected films I have ever seen. Everything about it is so nuanced yet so mesmerizing. It sucks you in and never lets go until the end credits start to roll. It's just that good.