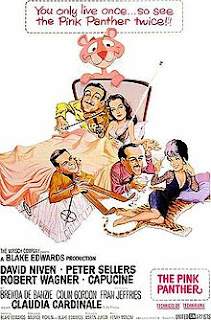 Since his passing last year, I managed to catch up on Blake Edwards' work. This year alone, I saw Operation Petticoat, Victor Victoria and Breakfast at Tiffany's.

I also saw what is considered Edwards' best known comedy: The Pink Panther. I wouldn't generally say that it's his best comedy, period. (That probably goes to Victor Victoria.)

The cast for The Pink Panther is recognizable by my standards. It stars David Niven, Capucine, Claudia Cardinale, Robert Wagner, and, of course, Peter Sellers. No surprise that Sellers is the focal point here, but he did have more leeway than the others.

And knowing Edwards' sense of humor, I knew what to expect. Basically it involves a somewhat silly concept getting blown out of proportion. Look, after a while, you start picking up small things.