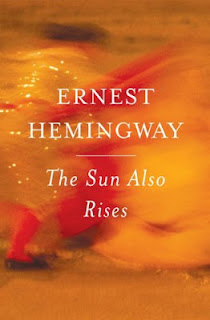 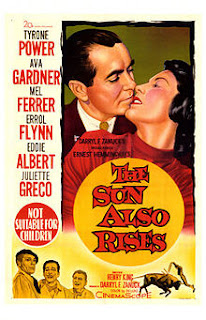 Catching up on reading is hard enough as it is. Throw in the fact I watch an obscene number of films, and it's clear as to why I can only read a scant number of books a year.

I'm finding it easy to catch up on classic films, but classic novels aren't as easy. I mean, you try reading a novel written in a style considered different by today's standards. Especially since I don't have the greatest attention span in the world either. (Hey, look, a cat.)

Still, that didn't stop me from reading Ernest Hemingway's The Sun Also Rises. It's a great novel, no denying that. After all, the whole novel is practically Hemingway's musings after his experience in World War I. (Mainly saying that because, there's a lot of drinking in this novel, but moving on.)

The film directed by Henry King doesn't exactly fall into the same category. Indeed, Errol Flynn is quite good, but there's an apparent forced air among Tyrone Power and Ava Gardner. I mean, they're good, but they don't feel right for their roles. But something else about the film just doesn't feel right.

What's worth checking out?: I'd go with the book.
Posted by MovieNut14 at 9:25:00 AM
Email ThisBlogThis!Share to TwitterShare to FacebookShare to Pinterest
Labels: book vs. movie, director: Henry King, reviews