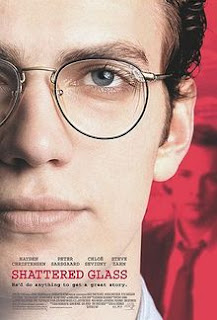 I have a weakness for journalism films, not gonna lie. Hey, Sweet Smell of Success, Ace in the Hole and His Girl Friday are among my all-time favorites. But those journalism films based on real events are even better.

During the opening moments of Billy Ray's Shattered Glass, Stephen Glass (Hayden Christensen) is presented as a respected writer for many big magazines including The New Republic, Rolling Stone, Harper's Bazaar and George. A later scene shows him as a writer who sticks to his ethics. But there's one stunning thing about the great articles he wrote: they're fake.

Why would a promising writer like him forge the facts for a story? In one scene where an article of his is being heavily examined, Glass is clearly under pressure, the terror of being found out sinking in. Also take note of the expression on his editor Chuck Lane's (Peter Sarsgaard) face. You can practically see the gears turning in his head, wondering if his top writer is presenting fiction instead of fact.

The performances from Christensen and Sarsgaard are remarkable. Christensen plays Glass as a scared boy hiding behind the veneer of a confidant man. Sarsgaard portrays Lane as the man Glass strives to be: in control, in a seat of power, someone people can look up to. Both are great, but Sarsgaard steals the show.

Shattered Glass is a great film. Being an aspiring writer myself, this shows what not to do to become a famous journalist. And on another note, can someone explain to me how Sarsgaard has never been nominated for an Oscar yet?

My Rating: *****
Posted by MovieNut14 at 3:16:00 PM
Email ThisBlogThis!Share to TwitterShare to FacebookShare to Pinterest
Labels: 2000s, movies, reviews