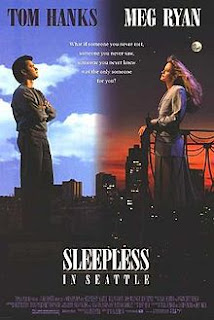 With Nora Ephron's recent passing, Hollywood lost one of the more clever female writers. Anyone who has seen When Harry Met Sally... can agree with me here.

Ephron's most famous work as a director is without a doubt Sleepless in Seattle. It's easy to see why. It's everything a woman looks for a romance film, and everything a man looks for in a comedy. You don't find these films very often.

And of course that script of Ephron's is wonderful. Very much like When Harry Met Sally..., the script for Sleepless in Seattle is full of funny moments that are also poignant at times, though it does get soppy towards the end. (My favorite moment was when one character starts crying when she talks about An Affair to Remember, and two others doing the same when they talk about The Dirty Dozen.)

I really liked Sleepless in Seattle, much more than I thought I would. (Well, I am a chick. Aren't we supposed to have a soft spot for chick flicks?) I didn't generally love it, but I might watch it again in the near future.

My Rating: ****
Posted by MovieNut14 at 7:18:00 PM
Email ThisBlogThis!Share to TwitterShare to FacebookShare to Pinterest
Labels: 1990s, directed by women, movies, reviews