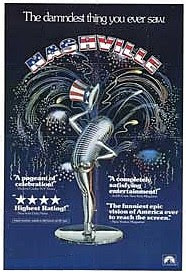 Robert Altman made unconventional films. He never did the same genre twice and each one of his films took his career into a new direction, for better or worse.

One key trademark of his is the use of ensemble casts. Naturally, one has to choose favorites among the many names. For me, the ones that stood out in Nashville were Ronee Blakley as a country star on the verge of a breakdown, Gwen Welles as a wannabe with no talent, and Geraldine Chaplin as a nosy reporter. (Oh, and the Elliott Gould cameo was boss.)

As well as the stars, the key aspect of Nashville is the music. From what I read, many of the songs performed were written by the actors that sang them. If I had to choose favorites for the songs, I'd go with Keith Carradine singing "I'm Easy" (a great scene as well) and Barbara Harris singing "It Don't Worry Me" (also a great scene).

Nashville is also, more or less, about America in general. It shows the way its people live essentially to a T. It's one of those few films that best captures a whole decade effortlessly. And let's face it, Altman was one of the very few names who could do this.

To sum things up, I loved Nashville. The cast is wonderful, but that's expected from an Altman film. I've read constantly that this is an essential film of the 1970s, and now I can see why.

My Rating: *****
Posted by MovieNut14 at 10:09:00 AM
Email ThisBlogThis!Share to TwitterShare to FacebookShare to Pinterest
Labels: 1970s, director: Robert Altman, movies, reviews