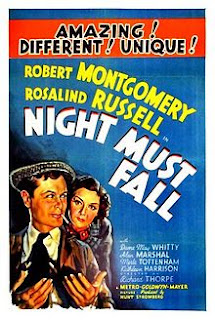 This always happens in Hollywood. You have an actor who is cast in roles where their charm and/or looks are the main focus rather than their acting. And the one role that shows the complete opposite has them playing a remorseless murderer. Anyone who has seen The Boston Strangler or Monster can agree with this statement.

One actor this statement could be somewhat applied to is Robert Montgomery. Throughout his run in Hollywood, he did either playboy roles like Private Lives or light comedy like Mr. and Mrs. Smith. Fortunately Richard Thorpe had faith in Montgomery when he made Night Must Fall, which was as far from any of Montgomery's other roles.

When we're first introduced to Danny, he seems like a respectable member of society. Olivia (Rosalind Russell) doesn't get won over by him like everyone else, simply because she finds something off putting about him. She can't exactly place what it is though.

It's when Danny's alone that we see who he really is. He's clearly a troubled man, but for what reasons? It's when Olivia discovers what secrets he's hiding that makes her even more unsettled by his presence.

Throughout the remainder of Night Must Fall, it's a battle between Danny and, more or less, his sanity. In another actor's hands, this could be an easy role to overdo. But Montgomery is careful not to do such a thing. The result? A performance that should have won him the Academy Award.

My Rating: ****1/2
Posted by MovieNut14 at 11:26:00 AM
Email ThisBlogThis!Share to TwitterShare to FacebookShare to Pinterest
Labels: 1930s, director: Richard Thorpe, movies, reviews