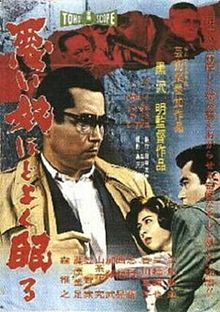 Like I said yesterday, foreign directors are a bit of a blind spot for me. I have seen a handful of films from several directors of the foreign field, but still I feel as though I am lacking with this spectrum.

One director I have watched a great deal of is Akira Kurosawa. I have seen his samurai epics Seven Samurai, Rashomon and Ran, as well as modern-day films like High and Low and Ikiru (my personal favorite). Yet I feel like I have yet to see his most important work.

I saw The Bad Sleep Well, which many call Kurosawa's take on Hamlet. It's a very interesting tale, but it felt a bit too long in several scenes. Still, Kurosawa's style is marvelous to watch unfold.

Starring Kurosawa regular Toshiro Mifune, The Bad Sleep Well blends Shakespeare with film noir. A combination that might sound odd to some, perhaps, but they are actually very similar in their themes. Anyone familiar with both can wholeheartedly agree.

Like I said, The Bad Sleep Well is good but I can't bring myself to call it great. I might like it more on a re-watch, but for now I'm sticking with my current thoughts on it. Anyone who's a fan of Kurosawa will be bound to like it.