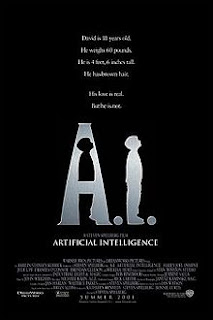 When one watches A.I.: Artificial Intelligence, they can see the distinction of styles between original director Stanley Kubrick and replacement director Steven Spielberg. Kubrick was the emotionally detached whereas Spielberg is the emotionally involved. And it shows in two characters especially.

Spielberg's style is represented in the form of David (Haley Joel Osment). He longs for the same compassion he is programmed to give, but instead receives contempt. He tries to appease to everyone, but it doesn't work with everyone, which can be applied to Spielberg's recent work.

Kubrick in turn is represented in the form of Gigolo Joe (Jude Law). He is more than aware of the sleazy side of life. Actually, he embraces it to the fullest. He knows of the society he's a part of; he just goes by his own rules.

When the two meet, that is when the two styles clash. David (the innocence Spielberg tends to portray) and Gigolo Joe (the familiarity Kubrick often displayed in his films) are both completely different, and yet somehow it works. Not sure how, but it does.

In toll, however, A.I.: Artificial Intelligence is merely good. The last half hour is a bit of overkill. (For God's sake, Spielberg, keep the bloody aliens in Close Encounters of the Third Kind, and that alone.) I did like Law's performance. (Then again, I just like him in general.) Personally this would've been a great film had that last half hour been cut out as if it was a malignant tumor. (Oh wait, it was actually.)