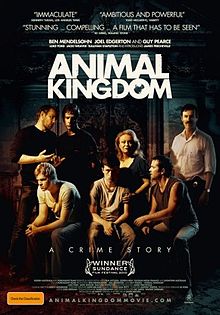 In the first half hour or so of David Michod's Animal Kingdom, we watch Josh Cody (James Frecheville) numbly observe the many antics at the home of his grandmother Janine (Jacki Weaver). Sounds boring, perhaps, but take into account that what happens in that house isn't exactly normal.

I think what I like most about Animal Kingdom is that it's told from the point of view of a bystander rather than a police officer or a small-time gangster. It allows the viewer to learn of the events at the same time as the bystander. A nice touch personally.

Despite the immense acclaim it won upon its release, there's not much about it that's that great. The pacing doesn't pick up until the final third. The dialogue isn't too special or memorable. Basically, it's all right.

Fortunately, the acting ensemble is top notch. There are three actors I want to highlight. There's Weaver, playing a woman with a sweet veneer and a dark personality. I also liked Guy Pearce, who is becoming a favorite of mine. (Familiar with his American accent, I was taken aback by his flawless Australian accent.) But I just love Ben Mendelsohn, who goes from calm to psychotic in the blink of an eye.

As mentioned, Animal Kingdom is good but nothing too spectacular. Good acting, yes, but not much else. Basically worth a rental.