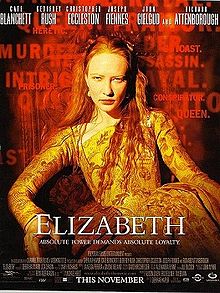 At times, getting a history lesson from a film isn't exactly the best of ideas. It strictly depends on the subject matter, and how well and interesting it is presented.

Shekhar Kapur's Elizabeth is one of those few exceptions. Yeah, a film about Queen Elizabeth I (Cate Blanchett) might not be a fun subject to watch in film form. But Kapur includes the many events that happened when Elizabeth succeeded the throne, and it's very captivating.

The cast is fantastic. Along with Blanchett, the names featured include Joseph Fiennes, Geoffrey Rush, a pre-Doctor Who Christopher Eccleston, Richard Attenborough, John Gielgud, Vincent Cassel and a pre-James Bond Daniel Craig. If I had to pick favorites, I'd choose Blanchett, Rush and Eccleston.

Much like The Lion in Winter thirty years earlier, Elizabeth avoids the stuffiness of most other costume dramas by keeping it lively. There aren't many scenes relying on the politics of the time. Instead, there are many witty exchanges between the characters, ranging between dry and biting. If only more costume dramas were like that.

If I wasn't clear enough, I pretty much loved Elizabeth. It's basically what costume dramas should be like: genius, witty and entertaining. Speaking of which...Andrew, got any you could recommend to me?

My Rating: *****
Posted by MovieNut14 at 10:52:00 PM
Email ThisBlogThis!Share to TwitterShare to FacebookShare to Pinterest
Labels: 1990s, movies, reviews