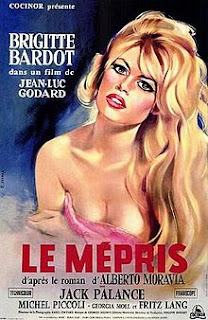 The death of a marriage can be hard on one or both members of the union. Okay, not as much if the couple essentially hates each other more than loves each other.

The best example is shown in Mike Nichols' Who's Afraid of Virginia Woolf?, but Jean-Luc Godard also provides such a portrait in Contempt. There's still a flicker of passion between Camille (Brigitte Bardot) and Paul (Michel Piccoli) when we first see them, but that fizzles out by the next scene of them together.

But this film isn't just about a crumbling marriage, oh no. It's also about making a film, in this case The Odyssey directed by Fritz Lang (as himself). Sure, it's not exactly what Francois Truffaut did with Day for Night, but it's also a French director's tribute to cinema though it's not as heartfelt.

Contempt displays many feelings frequently found in foreign films (say that three times fast), but mostly those that are regular in Godard's other work. Such feelings include disinterest, bitterness and, well, contempt. You don't see those feelings on a grand scale in an American production.

Contempt is a very fine film. Along with the acting and Godard's direction, Raoul Coutard's cinematography and Georges Delerue's score are both haunting and beautiful. It's a very bewitching film.