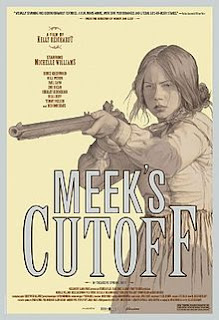 When films open on a quiet note, meaning no dialogue or music and contains only sounds of the scene, that means the director means business. They aspire to capture the mood just from the images rather than with words. It's a move I personally like.

Kelly Reichardt does such a thing with Meek's Cutoff. In fact, she does that for the first twenty minutes or so of the film. It's a bold move for anyone to attempt it, but Reichardt makes it work.

The tale Reichardt presents in Meek's Cutoff is one of survival. Well, not exactly the characters getting so desperate they resort to cannibalism, but rather they find themselves slowly running out of resources and need to find the essentials quickly before it's too late. It's something straight out of the old westerns.

Meek's Cutoff in toll is a very well-crafted film. Its slow pace and lack of action might be a problem for some, but not for me. In fact, it really works on a scale this small. Really something you shouldn't skip out on.

My Rating: *****
Posted by MovieNut14 at 8:34:00 PM
Email ThisBlogThis!Share to TwitterShare to FacebookShare to Pinterest
Labels: 2010s, directed by women, movies, reviews