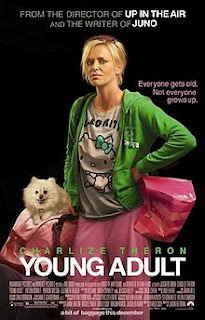 It's hard to relive your glory days when you're way past them. It's really awkward for other people to witness this.

You can imagine what's running through Matt Freehauf's (Patton Oswalt) mind when he sees Mavis Gary (Charlize Theron) in Jason Reitman's Young Adult. She's scheming to win back her high school sweetheart Buddy Slade (Patrick Wilson), regardless of the fact that he's now married and a new father. He thinks it's an impossible task; she finds no flaws in her plans.

By no means does Mavis' recent bad past justify for her plans. Divorced and currently ghost writing the last book of a popular series, she is perhaps trying to recoup what's left of her rapidly fading youth. However, the sad truth is she's an adult. She needs to face reality.

I think what I admire about Theron's performance is that she plays Mavis not as an immature adult but more as a teenage girl in a woman's body. She acts like a teenager, no denying that. (She dubbed a "psychotic prom queen bitch" in one scene.) Her frame of mind is heavily focused on one goal and one goal alone, which, coming from a teenager herself, is all too common for that time in life.

I very much liked Young Adult. Theron and Oswalt are great, as is Diablo Cody's script. (She even gets a jab at Twilight in there.) Reitman has recently become a favorite of mine, mainly for his ability to capture not-exactly-normal life.