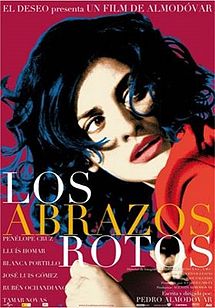 I'm bound to like any film as long as the characters are presented in a very compelling manner. (That explains many of the positive reviews here.) I just always like that.

I'm mostly drawn to directors who can do such a thing. One of them is Pedro Almodovar. Judging from what I've seen in Talk to Her and All About My Mother, I knew he could do such a task. (Not bad considering he's still a new name to me.)

His film Broken Embraces continues to display what Almodovar does best: capturing a menagerie of characters in one film, all of them not feeling a note out of place. I think the only other director that could do that was Robert Altman.

The film is a potent mix of love, obsession and, most importantly, cinema. (Seriously, is there a better combination than that?) Many directors try to grasp such a mixture, but I think Almodovar does it best. (Okay, maybe Bertolucci with The Dreamers as well.)

Still, I just love the way Almodovar's style oozes out of every frame. It's a feat that keeps people coming back for more, and I'm one such person. Pedro, you have yet to disappoint me. Keep up the good work.