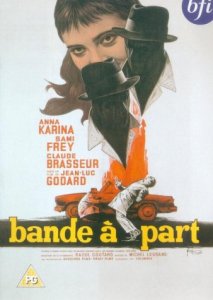 Jean-Luc Godard once quipped, "All you need to make a movie is a girl and a gun." That quote is definitely in full effect with the many film noirs of Hollywood, but it can also be applied to his own film Band of Outsiders.

The girl is Odile (Anna Karina). The gun belongs to Arthur (Claude Brasseur), the mastermind. There's a third person involved, Franz (Sami Frey), who is an accomplice. The task? Rob Odile's home. (Yes, she knows of the scheme.)

With Godard himself providing narration, Band of Outsiders gives its audience a look of French life with an American twist. Bear in mind this is from the same man who declared, "The cinema is Nicholas Ray." (Not to say that his declaration is a bad thing, mind you.)

I just want to point out a small but subtle detail among the characters. Arthur essentially treats Odile as nothing more than a pawn. Franz, however, treats Odile as a human being. It's this simple observation that shows what the would-be thieves are like.

Band of Outsiders may very well be the film that got me adjusted to Godard. Now with three of his films under my belt, I look forward to what else he has to offer. Because, hey, I'm always looking for another director's work to watch.