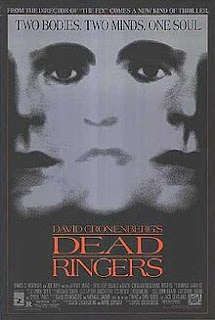 In the last decade or so, David Cronenberg's film have possessed a normal frame of mind. It's his early stuff that's bound to raise a few eyebrows. (Anyone who saw Videodrome can understand why.)

Take Dead Ringers as an example. It shows the many surreal traits of Cronenberg's works from the 1980s yet it also shows the early signs of the twisted everyday life which is prominent in his recent work. It's that bridge between those trademarks of Cronenberg's that makes the film all the more hypnotic.

The film stars Jeremy Irons in the dual roles of Elliott and Beverly Mantle. Both men share the same profession and apartment, but that's all they share. Everything else between them is completely different, especially their personalities. (It's hard to tell the difference between the two early on, but it gets easier as the film progresses.)

Elliott is the more dominant of the two. He's an arrogant person to many, but he deeply cares about Beverly. It's almost as if there is an invisible bound between them...

Beverly is clearly the more emotionally fragile of the two. He wants to escape the looming shadow of his more successful brother, but his personal demons get the better of him. Between the two brothers, Beverly draws you in almost immediately.

Along with A History of Violence, Dead Ringers displays regular life with a twist of darkness. Irons gives a stunning performance, leaving me to wonder why he wasn't nominated for it. Saying I perhaps have a new favorite Cronenberg film is a bit of an understatement.