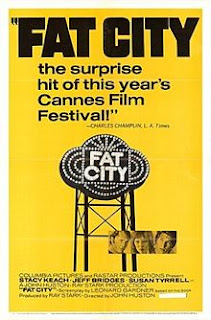 When one era ends and another begins, sometimes they clash. Take the filmmaking eras of Hollywood as an example. Names like Scorsese and Coppola took over where Hitchcock and Kazan left off. Suffice to say not many names of Hollywood's Golden Age fared well when the 1960s were coming to a close.

One of the few names that survived the changing of eras was John Huston. He was still working when many of his contemporaries were retiring or dying off. He didn't mind if some of his later work didn't fare as well as his earlier work; he just kept making films until the day he died.

One of his later entries was 1972's Fat City. Released the same year as The Godfather and Cabaret, it's one of the year's underseen entries. And when one watches it, the style of the film resembles more of Bogdanovich than it does Huston. But that's not a bad thing in the least bit.

The film flip-flops between former boxer Billy Tully (Stacy Keach) and aspiring fighter Ernie Munger (Jeff Bridges). In a way, Ernie is what Tully was in his prime, and Tully is what Ernie will probably become. It's a nice touch to be honest.

It loses its way towards the end, but Fat City holds up throughout the first two-thirds. Keach and Bridges are very good in their roles. And you have to admire that Huston still had that directing stamina within him. Not many directors have that.