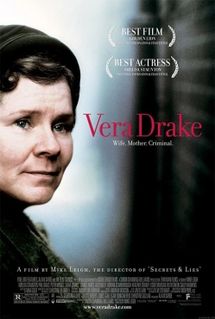 We've all heard of those stories, the ones about people with ideal lives but also a dark side as well. We ourselves might have encountered such a person.

In the case of Mike Leigh's Vera Drake, it's that of the title character, played by Imelda Staunton. She's a hard-working woman, always caring about those around her. She helps those in need, including women who to rid of their unwanted, unborn children.

The scenes of Vera inducing miscarriages are hard to watch. They were also uncomfortable as well. They aren't the bloody gorefest one would expect. Vera opts for the cleaner solution. And surprisingly, Vera still keeps up with her cheerful demeanor.

Well, at least until the police catch up. That is when Vera completely falls apart. Perhaps she didn't think of the consequences after all this time. That is why her reaction to being found out is so devastating.

Vera Drake just sticks in your mind as you watch it. Not one scene feels false or out of place. (Not bad for a film made without a script.) One more note to mention. As raw and bold Hilary Swank was in Million Dollar Baby, the Oscar that year should have gone to Staunton.