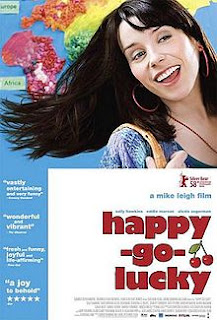 Poppy (Sally Hawkins), the protagonist of Mike Leigh's Happy-Go-Lucky, is the kind of person one would encounter every now and again. You know, someone who has supposedly no worries in the world.

Of course, not everyone is enamored by Poppy's peppiness. They keep a form view on life while Poppy has a positive outlook, regardless of the situation.

Leigh provides a portrait of an average woman's everyday life. Poppy goes through her day with a smile practically glued on her face. You know the saying smile and the world smiles with you? Doesn't exactly apply to Poppy.

Indeed, Poppy's constant happiness does wear on after a while. It takes time to get used to it. Once you do, she is a nice presence in the film. A far cry from some of the characters in Leigh's other films, don't you think?

All in all, I liked Happy-Go-Lucky. Not as much as the other Leigh films I saw, but still as good. Hawkins is very lively and again, it's a nice change of pace from other films released in recent years.