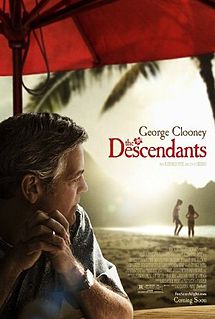 It's funny. For years, there have been names straining to be known as actors rather than movie stars. Hey, just look at anyone that made it big during the 1950's.

It still persists today too. One such example is George Clooney. I know he's a talented man being both an actor and a director, but most of the time I can only see him as a modern day Cary Grant. But much like Grant, he can do wonders when in the hands of the right director.

As Matt King in Alexander Payne's The Descendants, Clooney gives the best performance of his career to date. He isn't his suave, charming self here. Instead, he's more down to earth. (He also wears those dorky Hawaiian shirts, but moving on.)

Matt is facing two different dilemmas: he finds himself looking after his daughters, and he's underway in a deal to sell a remaining piece of Hawaiian land his family had owned for generations. Both dilemmas, however, could go hand in hand. One about reconnecting, the other letting go. Towards the end of the film, there's a great shot of Matt, part of his face in the shadows and making him appear older especially after all that has happened.

Along with Clooney's work, I loved the whole film. Mind you, the only other Payne film I saw was Sideways, but I could tell this was a Payne film because of the slight air of cynicism floating within several of the characters. Also, saying Clooney's now my frontrunner at the Oscars is an understatement.