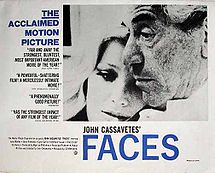 John Cassavetes' must have been running a mile a minute during those fifty-nine years of his life. So many thoughts appeared in the films he made.

Such is the case with Faces. It's Cassavetes' view on the sexes and marriage in general. It's neither a positive viewpoint or negative, just somewhere in between.

Faces also examines how dissatisfying life can be. The four principal actors (among other supporting characters) are completely unhappy with what life has offered them. Even if they're happy, their sour views on life always overrule them.

That's what makes Faces a bit of a frustrating film to watch. There's so much pessimism in practically every scene, one could frantically try to find any sense of contentment. It becomes more aware as the film wears on.

Still, Faces is a well-done film. Those problems mentioned above aside, there are some great performances out of them. Though I can't shake the notion that Faces is probably the weaker of Cassavetes' essential films.